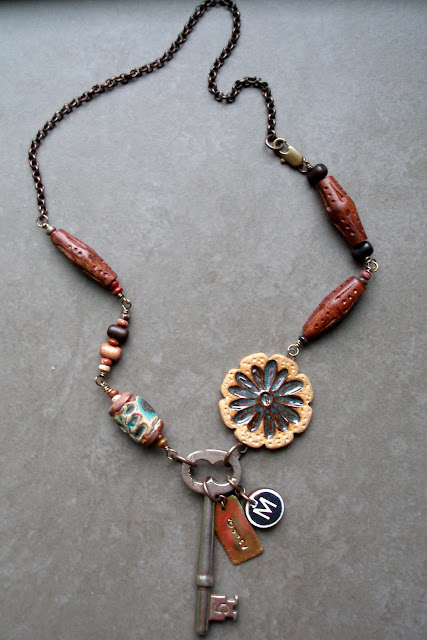 One of my customers contacted me recently to make her a necklace. Not just any old necklace though. A keepsake necklace with many components and individual meanings.  I wanted to share with you, the final outcome. The results. The cause and effect, of a final design concept. It started with JoAnn's vision that started with a key, and the end result is a piece of jewelry that she can cherish and possibly even pass down through her family in the future. One that holds more meaning than just any old necklace.
This skeleton key, is an original key to a house owned by JoAnn's Grandparents. Sad part is, the house is no longer standing.
"My grandparent’s (my mom’s parents) home was recently torn down in our town to make way for a 2-yr college to expand.  Theirs wasn’t the only house; all the homes in a 1 block area were taken.  My grandparents have been gone for 20 yrs. and my mom sold their home 20 yrs ago to a couple who now had to move because of this expansion.  We were lucky enough to go through my grandparent’s home after they moved out and before it was torn down just last week.   While meandering through the empty rooms, and reminiscing  the many times I spent there, I found 2 skeleton keys in some of the doors.  Of course, I quietly pocketed them.  They are now sitting on my kitchen window sill where I can see them every day." 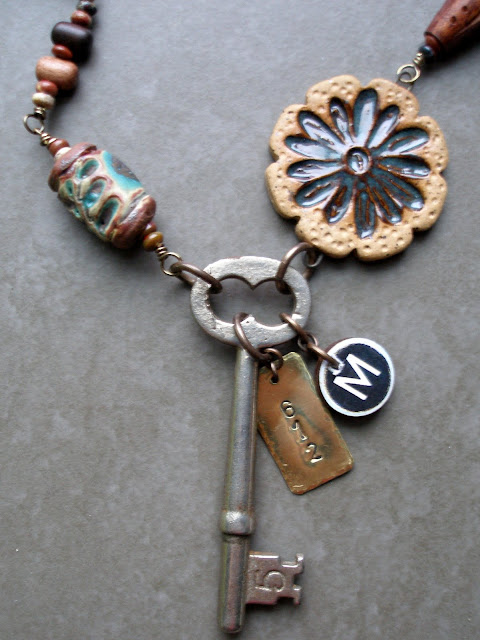 Clearly the key had to be the focal.  JoAnn asked me to include the letter M. Her Grandparents last name is Maek (pronounced Make) A typewriter key, because JoAnn is a typist.  The number on the stamped tag (from Stacy Hartis of Sissy & Jacks) is "612" which was the house number. JoAnn even sent me a photo of that in the email: 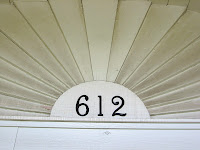 The foundation of the house was red and black granite. Finding stones the exact color was a challenge without seeing it but I did find some nice poppy jasper that had specks of cream, red and black. I didn't want it to be too overpowering so I chose really small smooth rondelles and only used a few in the final design.


JoAnn's Grandfather did a lot of carpentry in the past and did Marquetry as a hobby after he had retired as a Barber in the town where they lived. She asked me if I had wood beads. DO I EVER! Of course, I easily found these carved wood elongated bicone beads to be the perfect fit for this component.


"The last thing I’d like to mention about my grandparents is that they were avid growers of flowers; mainly gladiolus.  My grandfather (his name was Walter) specifically grew glads and entered them in the county fair every year.  My grandmother tended to other well known perennials in their backyard.  So if you have any, or can acquire any ceramic medallions with a flower on it, that would mean a lot."

I have a lot of floral type beads and focals in my bead stash, but came across this pretty cool Lisa Peters Art flower connector. Although not a gladiola, the bold image of a flower stands out, and I thought it paired nicely with all of the other elements in the necklace.

I wire wrapped the wood and jasper beads at the forefront of the necklace. The ceramic green nugget at the left, was an addition I added on my own accord. Lucky for me, JoAnn liked it! It's an interesting addition, but an added color that I think adds to the overall design. A ceramic barrel from Keith O'Connor.

It didn't take long to put together a preliminary design, although it was quite different from the one you see here. The key was horizontal in the first design. The chain was actually more jasper and wood beads up around the back.  JoAnn asked to see another version, one where the key hangs vertically instead. So she could get the idea of how it would wear. As soon as I revamped the design into this finished piece, I knew it was going to be the jackpot. JoAnn loved the final outcome. All of the elements that she asked for were included, but not only that. The vision that she has in her mind, has been played out through my fingers and she was quite pleased with this redesigned piece.

Taking on custom orders can be challenging, and sometimes jewelry designers decide to either be open for this type of request, or not. JoAnn had been such a wonderful and communacative customer in the past, that I knew working with her on this design would be successful in the end. I recommend doing special keepsake pieces like this for your customers, but the only advice I want to give is, make sure you are open to all ideas, be willing to rearrange, and take take time to create a piece that the customer connects with immediately. Communication is key, as with anything, really. And in the end, the success of having someone swoon over something you created with their ideas- there is just nothing more satisfying than that.

Thank you JoAnn for thinking of me and asking me to make this piece for you. It means a lot to me that you would trust me and my creativity for such a heartwarming and special necklace! 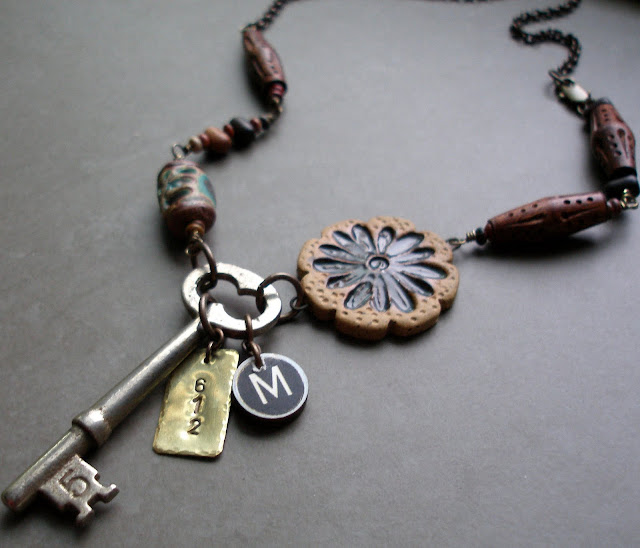