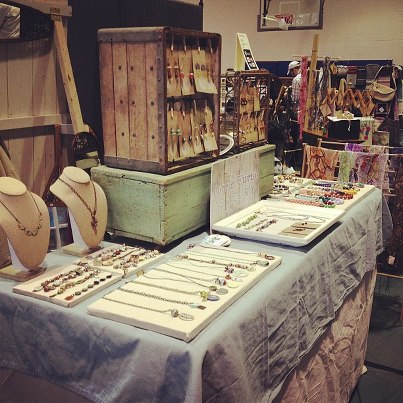 As you have read the past few days, I had a show this weekend: The Indie Garage sale in Utica NY. It was a large show of over 100+ vendors, and I was juried in which was really excited. It was my first juried gig.  Above and below you can see my set up. I was allowed one 6 foot table. It was definitely tight quarters. As you can see my neighbor Greg's booth behind me had a wall to showcase his snowshoe mirrors and it was pretty much right at my back when sitting in my chairs behind my table.

I was happy with how my booth looked overall. These shots were taken on day one. One Sunday I tried moving things around a bit and as things sold I brought out new stock. Toward the end of the day, I had quite a bit on view but the show was pretty dead after about 3pm on both days. It went til 6 so it really was quite a long day.

I had some really great neighbors. My new friend Gail from Tipp Toad, was great to chat with throughout the whole weekend.  I bought some things from a few of the vendors too. It's hard not too, and I really tried not to go walking around the show too much to keep from being tempted. But I did come home with a candle from Witty Wicks, a small ceramic bowl from LGG Creative Art... amazing leather earrings from The Red Caravan, and a small moss terrarium from a small booth across from me. I am not sure what their business name is, they didn't give me a business card.

I had some great support from a few of my Museum friends, and also some neighbors!  I finally met a few other neighbors from the hood who walk their dogs by my house every day too! That was really cool! They had no idea that I was a jewelry designer and it was fun to put names to faces!

On Sunday I brought a copy of my book and had it out on display.  The woman at Robyn's Egg Jewelry came over and noticed the book and was telling me how much she liked it, and has referred to it a lot since it came out. She wanted to know if it inspired anything of my own and I told her I co-wrote it with my friend Erin. Her jaw dropped to the floor and she was thrilled to meet one of the authors. It was really a very surreal but cool experience!

All in all it was a good weekend. I walked away with a nice chunk of change, helping my confidence level for paying my mortgage in a few weeks.  It wasn't the same type of turn out I've had at other large shows but it was pretty good for an inside gig, and I'll take whatever I can get!!

I will be spending some time later today, photographing and getting some new stuff listed that didn't sell at the show. I really need to destash some stuff too but I'm still thinking about smart ways to do that. I just have too much stuff. I have to get rid of some things that have been around for far too long. My family members may be getting a whole lotta jewelry for Christmas! :)