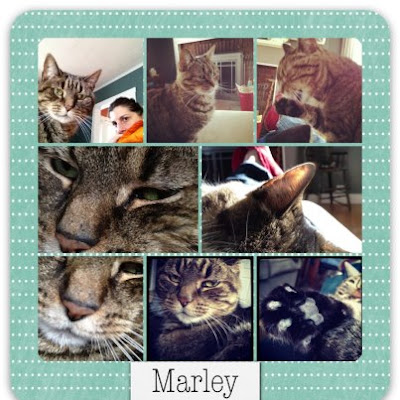 In 1997, Joe and I moved into an apartment in Rome, NY, straight out of college. He was student teaching and I was working at a local day spa. One day our landlords called us and said that they found a little tabby kitten running up the highway and it almost got hit by truck. They rescued her and took her to the vet and had her checked out, and they wanted to know if we'd be interested in taking her. It took me maybe a 1/2 a second to say yes. She had to be at least 6-8 weeks old at that point. The most adorable little thing you ever saw.

Over the next several months, she clawed the shit out of my carpet, loved to play on the banister of the stairs, went through a couple heat cycles, HOLY SHIT what a pain in the ass, we got her fixed right away and declawed. (would never do that again- but at the time we thought it would be a good idea since she had some sort of aversion to scratching posts!)

Several months later, Joe and I split up for a short period of time. I kept Marley and Joe got his own cat, a black 7 toed girl named Jezebel. We got back together and bought our first home in Rome. A  3 bedroom Cape. We decided to bring both cats into the new home, and we were hoping it would work out, being that neither of them had claimed the new house as their own. Day one. Marley cornered Jezebel and was ready to eat her for lunch. I was so stressed out, but fortunately I had a friend at the time whose sister had just lost her cat and she adopted Jezebel.

Marley loved the new house and quickly became quite fond of the gas powered stove in the living room that she loved laying in front of. We were there, got married a few years later, sold the house in 2007 and bought our new home in New Hartford. Marley moved to the new house without a problem. She loved the space and had a hell of a time running through the entire house at top speed during her rambunctious moments. She slept often on the dining room window perch and enjoyed watching the birds. She never had any interest in going outside, but had tried to escape on one occasion at the old house.

As Marley got older, she got lazier, and started losing weight a few months ago. We took her to the vet and found out she had the beginning stages of kidney disease, and also liver disease. Over the next few months, I left my day job and was home working, and caring for Marley. She became quite dependent on me and spent the last few months on my lap or Joe's lap as often as we allowed her.
After a few days of seeing a puddle of drool on her bottom lip, last week, I figured something must be going on in mouth. When I peeked in her mouth I noticed the bottom right jaw swollen and figured she had some sort of tooth infection. So I took her in to the vet on Saturday morning.

It was not good news. Just seeing the look on Dr. Tom's face, I knew it was not a good scene. He figured it to be a tumor, but needed an x ray to be sure. So they kept her for the afternoon and used anesthesia to take a few xrays. They had to send the results out to a radiologist. I took her home Saturday night and she was sleepy and groggy- we gave her some high powered pain meds. I knew at this point that it was probably not going to end well.  The fact that the vet gave me such powerful drugs made me realize that she must be in some serious pain. I felt terrible. Wishing I had noticed the issue sooner.  Sunday the results were terrifying. The tumor was certainly cancer, and the only remedy would be to remove the jaw. Not an option for me. Not for an old girl that was 16. Not for my girl who had already suffered enough. So we took her back in Sunday afternoon and had her put to sleep. I know that she is at peace now, but I cried my heart out all day yesterday after we returned home without her.  The guilt yesterday was almost too much to bear. I feel so sad, that she's gone. But feel guilty that I had to do this to her. I feel guilty that there were times that were trying, the last few months, where my patience ran thin and I raised my voice, begging her to please stop pacing and go lie down and relax.  That I didn't have enough time to say good-bye and love her more.

She was a wonderful pet. Always willing to love me, and sometimes bite me.  :) She was a great companion. Independent but also a lover who was quite content on a lap for hours. She purred right up until the end. I know she was a happy cat. And this was the best thing I could have done for her. I keep telling myself that. I know that she will always have a special place in my heart. No cat will ever live up to her legacy. But this house is way to quiet now. So Joe and I will be searching for a pair of kittens to adopt.

The last few days have drained me, emotionally and financially. To combat the unexpected vet bills, I'll be offering a coupon code this week for 25% off your jewelry orders. Please feel free to use the code MARLEY to get your discount.

Thank you for reading this. It has helped me remember what an awesome cat Marley was. I miss her so much and will for a long long time.