2 Days in the Life of a Craft show Vendor

Click this image above to get the full panoramic effect.... I am really loving the ios7 for my iPhone, and it's new camera features!  So above, you'll see the general area of where my booth was set up this weekend for a 2 day show in Sharon Springs NY. I'm usually always in this general spot, but never so close to an entrance, which was just to the left of the both to the left of mine. Which made it nice for traffic. Also, another bonus- I had lots of sun throughout the weekend making it a bit warmer. It was a chilly weekend!

Setting up the booth early Saturday morning, took some extra time because I was by myself. Setting up the 12 x 12 tent with one person is a bear.  It CAN be done, and WAS accomplished but not without a lot of sweat and almost tears.  The rest of the set up was easy-peasy. As you can see, I used my pvc pipe system to raise the tables up 14 inches. they are surprisingly solid and with all the heavy wood crates and slate tiles on them, helped tremendously in stabilizing them. 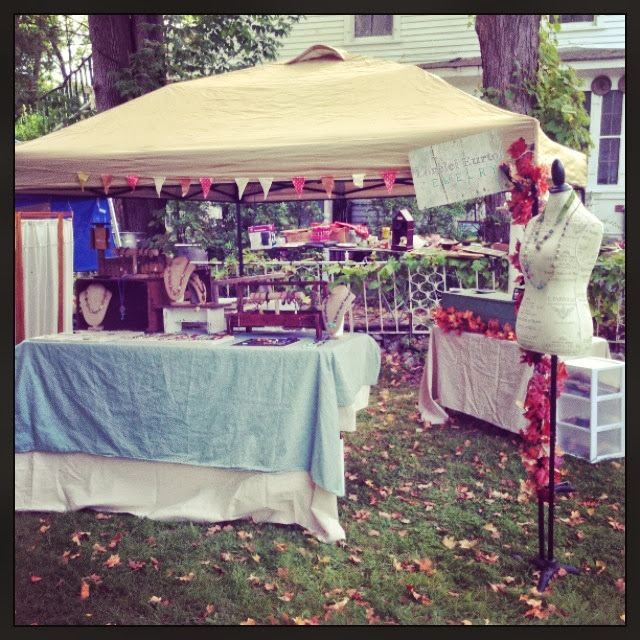 Added a bit of Autumn flair with some fake leaf garland.  and just look at the natural leafy carpet down on the ground, perfect! 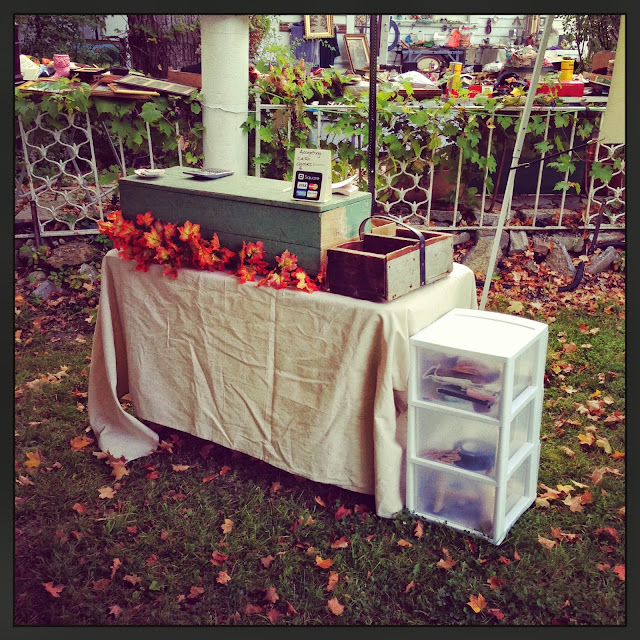 the check-out station also had some leafy foliage decoration. This green box is the best - put trays of jewelry inside, and would pull things out of "the vault" when pieces would sell.

A woman came into my booth this weekend and asked if I had anything with acorn charms. So I pointed out the 3 pieces I had on display that incorporated some acorns. She found one she liked but said " well I really like it! But I just don't need the jewelry, I just want the acorn"
Ummm. maybe you should head to a bead show? She never once asked me who made the charms, which is something I would have gladly shared with her, but she acted like I was going to sit there and just take apart that piece and give her the acorn. I don't think so. Sorry Charlie. Doesn't work that way. 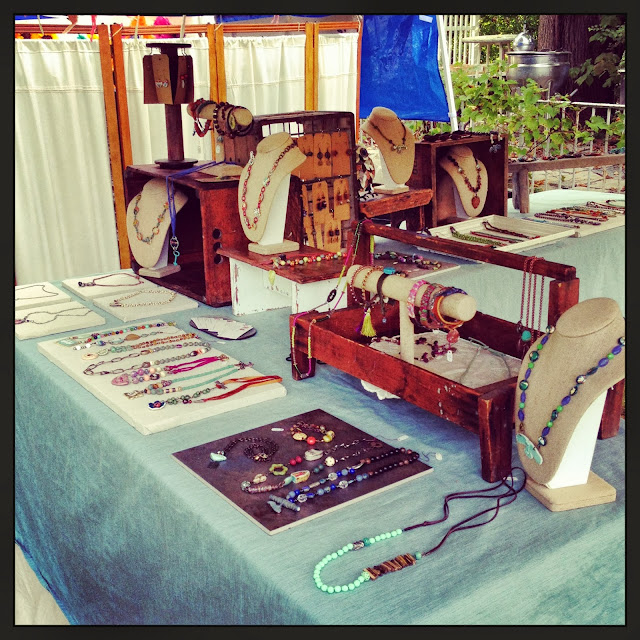 Display was pretty much as it usually is for my shows. Wood crates, linen  tiles, busts, and some slate tiles for displays. This table, I pushed up against the front of the tent and was the first thing people would see when walking by. A bunch of FB friends suggested this to get people engaged, and it really worked wonders! I will do this from now on! I always had people looking, and usually coming in to see more at the second table. 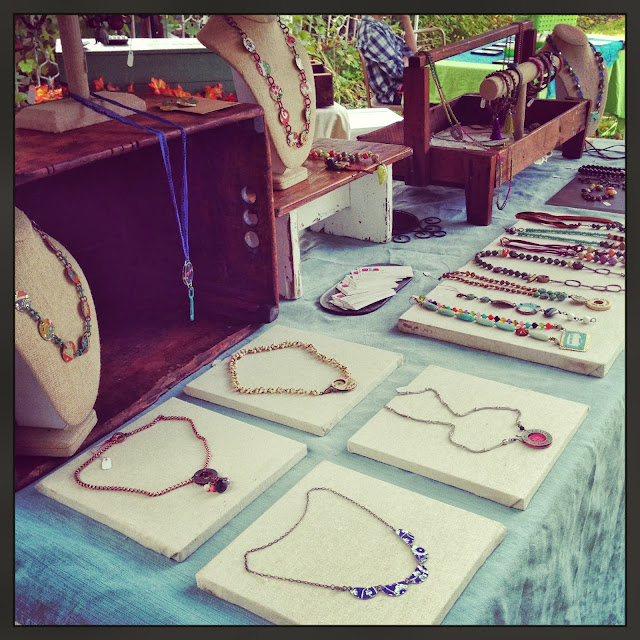 In the future, I will do a few things differently. My tin pieces (seen above) were the highlight but I didn't have many to show. SO I will have MORE tin for my next show, and I will definitely bring some un-cut tins to show people what exactly it is I've been using. A woman stopped by and wanted to know where the pretty ceramic disc necklace went that she eyed earlier and I realized it was one of the tin necklaces she was actually talking about.

I think I need to also invest in a few more busts so that I can have a bit more to display vertically. 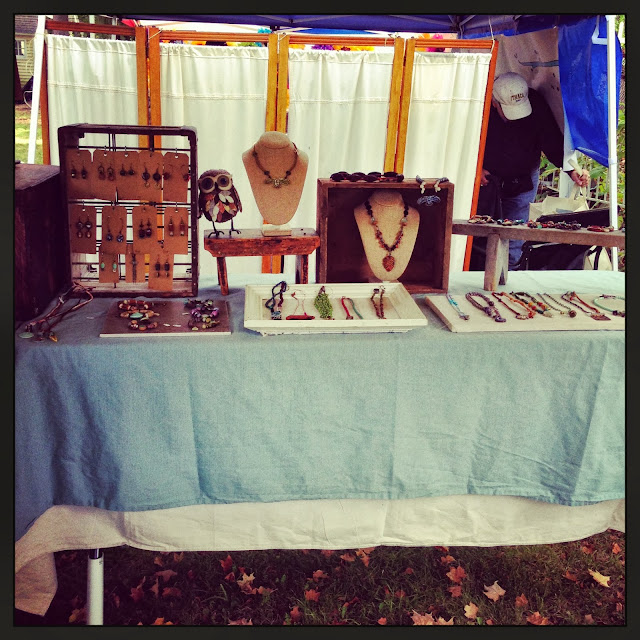 I need another crate like the one above, far right that I use to display earrings. I could have used another display for the front table. I could only display about half of my stock on this one crate.

I notice in the photo above, a wrinkled tablecloth which normally doesn't bother me but makes me think maybe this would have been a great spot for a banner. I should look into getting one made up. 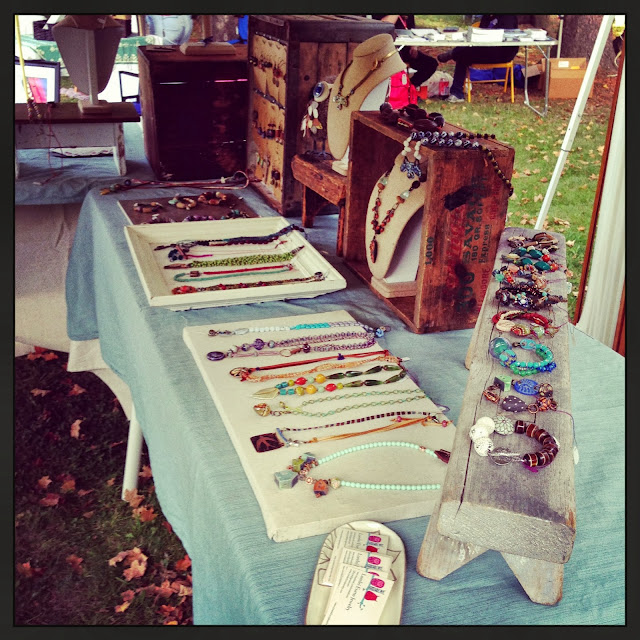 The first day, was kind of a disaster. I got home all excited to find out I had really done well that day in sales. Went to process my credit card payments only to find that I failed to get all the info I needed to process them manually. I had little to none cell service in Sharon Springs.  So I couldn't use my square at all and there was no free wi-fi to speak of. So I took down numbers to process them later and forget to get the CVV code on the back of each card. I did get everyone's name and billing zip code so I was able to look most of the people up online and could call home phones if they had them listed. I left several messages for people but have only heard back from one. So if you saw me at the show this weekend, made a purchase with a credit card on Saturday, please call me! I need that number to process the payment!! 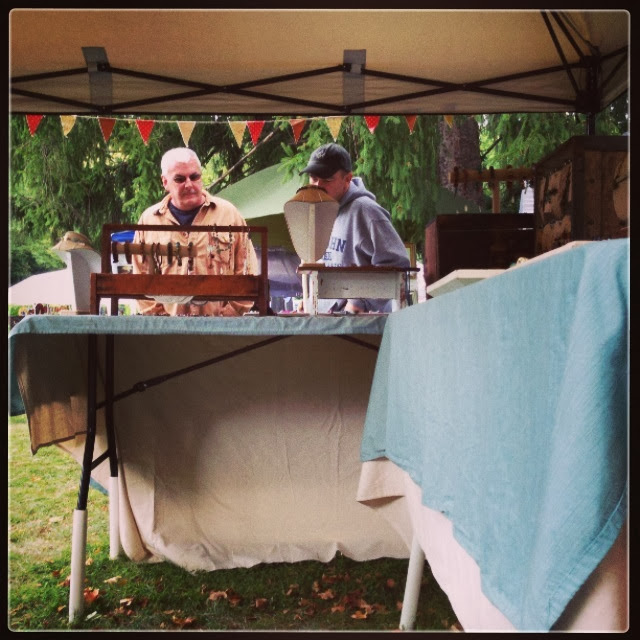 This was my view at one moment on Sunday. It was nice to see many men stop to check out my booth too. These guys hung around a few minutes, looking at my jewelry.

I had really great feedback from shoppers all weekend - the majority said that my jewelry was VERY unique compared to what they saw other people selling. That's a good feeling, to know that I am actually standing out a bit from the crowd. I relied on what people were saying because I never got the chance to go around and check out what people were selling.

Packing up my booth was BRUTAL. Many trips to the truck that was parked a ways away, made me realize that I need to possibly invest in a wheeled cart that I can pile all the crates on and carry them all at once because I had to have taken about 150 trips back and forth. It felt like 150, I know it wasn't. This will absolutely be the last time that I do this show alone without an assistant.

All in all it was a successful weekend. Sunday wasn't as busy as Saturday was, but got a few sales and had a nice time talking with people that were out enjoying the festival. Made a few new friends, and enjoyed some good conversation.
Labels: beaded jewelry booth set up craft fair harvest festival 2013 photography Sharon Springs NY