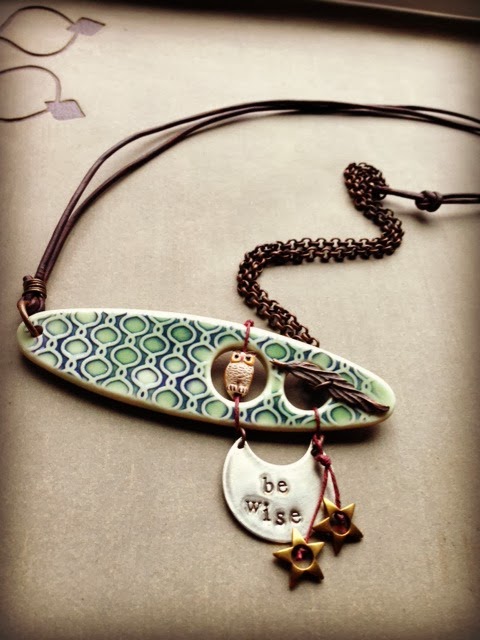 When I got this pendant from Nancy of Round Rabbit Extra I knew right away that I was going to use it horizontally instead of vertically.  Something about those 2 holes, open up a whole plethora of possibilities in terms of design.  Part of the fun, for me, is crafting something new and unique out of something that is typically "just a pendant". Nancy's pieces usually lend well to this notion of layering with other components.  I've got some palpitations for these little beads from yesterday's update. I have a couple of these ordered and can't get them fast enough.

This necklace incorporates some brass rollo chain and some leather cording. I kept the necklace part fairly simple because I knew I was going to be adding some other components to the pendant and I wanted that to be the main focus of this piece.

First I was going to use wire to attach the owl inside that inside hole of the pendant but didn't want to damage the porcelain and so, I grabbed some trusty linen cording instead in a coordinating dark burgundy color.

After I thought about it awhile and played around with different knotting, I decided it might be nice to add some text element to this design that played off the owl so I created this crescent piece out of silver nickel sheet. I popped some holes into each side of the crescent with an oval shaped Euro punch. As I was playing around with different techniques, I thought at first I would use a jump ring to attach the crescent to the pendant. But a 7mm jump ring was too small. I punch a bigger hole in the right side of the crescent and then found that I didn't like the large jump ring afterall. Now I had this big unsightly hole at the right side.

Problem solving happening at this point, I decided to use linen cording and use the knot in the cording to cover that larger hole. Dangling 2 pieces down, and attaching these cool star beads, it became kind of a moon/star/owl thing and I really liked the outcome.

That smaller outside hole acts as the toggle for a toggle bar from Vintaj Brass.

This necklace is available for sale at Etsy or my webstore. 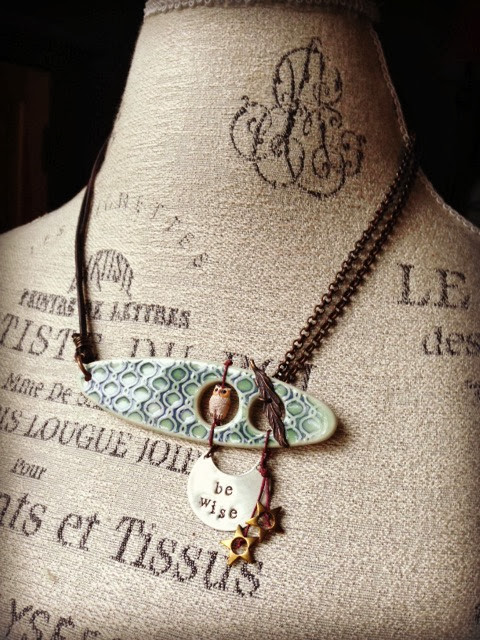